In recent years the “Lyric video” has become a standard in the repertoire of many artists looking to create visual content for their music. Requiring a minimal investment compared to traditional music videos, these videos prove to be particularly engaging for fans.

The last segment of the Modern Music Promotion & Social Media Music Discovery series explored maximizing the value of existing audio content. This week we will be diving into into a similar topic as we cover investing in visuals and the benefits of lyric video production.

Say Hello to the Lyric Video 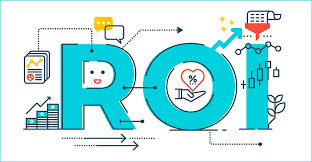 A lyric video is defined as an audiovisual presentation of music that displays a song’s lyrics on screen synchronized with the corresponding vocals. While the definition is quite logical, the explanation makes it very easy to dismiss them as simple “karaoke” videos and overlook their true potential. However before making that mistake it is important to remember it was Da Vinci that said, “simplicity is the ultimate sophistication”. This lesson applies directly to the subtle depth of lyric video that combines audio and visual elements to help people prioritize an artist’s message to and listen.

Other than the fact that lyric videos consist of song centric, message driven visuals that encourage listening, they also alleviate a significant workload associated with traditional music video production. Case in point, Cee-lo Green’s, F*ck You lyric video. Since the lyrics were already a part of the song, there was no need for a production crew to create and shoot visuals. Instead, the process relied entirely on computer effects, ultimately translating to money and time saved. By striking a fair balance between art and promotion, lyric videos act as a cost effective means of visualizing music.

The Lyric Video Clips A.K.A. Lines 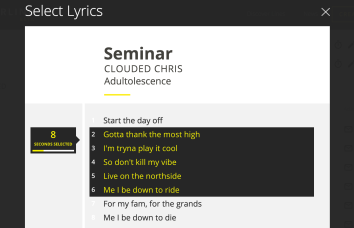 Compared to traditional music videos, lyric videos are definitely better suited to encourage listening. However, if the goal is to leverage social media as a platform for music discovery, using an entire song for one lyric video may actually be squandering content. Reason being, social media content with the highest overall success and virality tends to be short form (right around 30 seconds in length). This is why we prioritized giving the ability to create and share lyric video clips (“Lines”) when we built LineForLine. In addition, to helping artists effectively ration content and promote their catalogue, sharing lines of lyrics with sound helps people listen and connect to the message of their music. Quite often actually in fact, more compelling messages create some of the deeper connections. As avid hip hop fans this drive to help spread the message of an artist’s music was practically second nature, since we were already accustomed to sharing and texting lyrics that connected us to the music. This was actually the true motivation behind LineForLine.

Regardless of their gravity, lyrics always have the potential to speak to listeners. For this reason, sharing lyrics with sound, and preserving the context of an artist’s words is a highly effective way to communicate with fans and create a visual, while avoiding the pitfalls of highly involved video production.