Despite his prolific pen, in most circles the name Timothy Elpadaro Thedford would likely strike up no recognition. More disappointing is the thought that after hearing his MC pseudonym most music fans would ask, “What the f*ck is a Jay Electronica?”. Fair question, but perhaps the right question is, “Where the f*ck is Jay Electronica?”

That is because the New Orleans born rapper mistakenly identified as Timothy Thedford, continues to maintain one of the most elusive identities of any respected artist in recent history. An identity so elusive, that questions to the effect of, “who?, what?, where?, when?, and why?” have become second nature when he is discussed. However last week, for a seemingly short moment in space and in time, we had our answers. On Thursday April 13th, at the Music Box in Downtown San Diego, Jay Electronica put on a rare domestic performance. The answer to “why?”, becoming clear the moment he appeared on stage and gave his listeners what they came for. A lyrical dose of hip hop purity that can only be administered directly from the source. 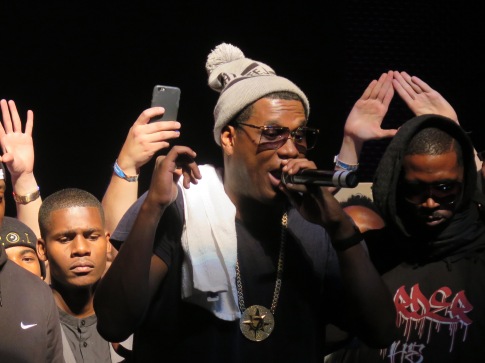 After spontaneously joining the crowd for at least 30 minutes of his set, and randomly inviting a local MC to step on stage for a relative “pop up” MC showcase, the energy exchange culminated with Jay inviting all of his fans on stage, and then giving out his personal phone number to the entire crowd.   Still, taking all that excitement into the consideration, the real draw was quite simple – the opportunity to hear the man they call Jay Electra show his linguistic supremacy, live and in the flesh. A truth that became  ever so clear the moment he hit the stage, and breathed life into the crowd. He delivered each bar with more conviction then the next. His lyrical prowess became more overwhelming every time DJ TJ the King would cut the music and Jay would spiral into an Acapella set. All the while, never missing even a word of his rhymes.

Jay Electronica, while keeping a youthful presence, has been on this planet for 39 years. He is from the Third Ward in the N.O. He came from a time and place where nothing could be taken for granted. And it is obvious that he takes the same approach when he grips the mic. The exciting sound that is inherent to most hip hop beats can make it very easy to take an artist’s words for granted. Bearing witness to the Jay Elec live lyrical exhibition was not only an ode to hip hop, but an ode to the potential power of our words.