Warning, the tweets in this article may cause laughter, adulation, anger, disgust and utter confusion.

Full disclosure, I love Kanye and his tweets but totally understand why people may hate Kanye West as a person. He can come off as shallow and ruthlessly self-absorbed. A Kardashian loving mascot for the maligned, entitled and undeserving American stereotype of what is wrong in popular culture today. He’s ran on stage to ruin awards speeches, hijacked telethons and questioned the musical abilities of a man who can play over 20 instruments. In fact, the dislike of Kanye is so common that the phrase, “I like Kanye’s music but…” has become an introduction to the majority of conversations about Kanye West. The question is how do we separate the art from the artist? Or perhaps more importantly, should we?

Vincent Van Gogh was a prick. That is not a subjective statement but based on his own accounts of the person he was and the people that knew him best. He’s often hung as a banner for the artist who dies penniless and has their work appreciate in value postmortem. The truth of the matter is that if Van Gogh wasn’t a crazed, borderline sociopath he would have made a fine living for himself.  People simply didn’t want to deal with his unbearable nature. Imagine what the Twitter timeline would’ve looked like after the world found out he cut off his ear?   This archetype of an artist has been occurring in history since art was incepted and shows no signs of subsiding. And this is the inherent give and take of truly special creative talent, the people that are often the best at it have a tendency to be self destructive ego maniacs. 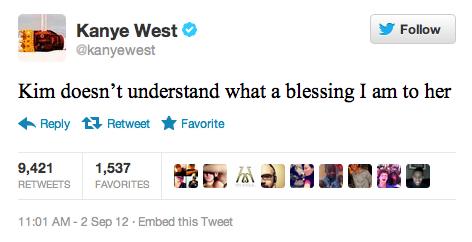 Kanye West comes from well documented middle class beginnings unlike many of the hip hop artists that we’ve seen ascend to superstar levels. That key difference between Kanye and many of his contemporaries has always made him a bit of a weirdo.  He’s a walking oxymoron to what we think of as the stereotype of a rap artist.  He grew up in the South Side of Chicago, but one of his most famous struggle bars is about folding clothes at the Gap.  This sort of introspection into his past is what has made Kanye such an interesting artist but also probably reveals why he has some noticeable insecurities. He even released a track called “Gangsta Wannabe” where he outlines the duality of his experience as a major Hip Hop act that that never purported to be street:

An’ I’ll defend myself, but I aint lookin’ ta fight

Some dudes say dey ballin’, but that aint me

The need to genuinely like an artist in order to fully love his or her art isn’t exclusive to painting or music though. Consumers find themselves in this quandary all the time, sometimes in much more serious situations. Take for instance filmmakers such as Roman Polanski and Woody Allen. Roman Polanski has been on the hideout from the US law officials since the early 1970’s due to a reported statutory rape with a 14 year old. That being said, Chinatown is widely considered one of the best movies ever and he’s gone on to make movie after movie from not extraditable countries for the last 4 decades that have achieved critical and commercial success. Woody Allen has made almost a movie a year for the last 35 years. He also married his adopted daughter and has been accused of pedophilia. But even knowing these universally agreed deplorable acts, box offices still fill up and critics gush.

Kanye hasn’t done anything illegal mind you, his crime is his ego and the loudness in which he expresses it. In fact, one could argue that Kanye is more hated than many of his counterparts. Even the ones that have committed truly heinous acts because Kanye committed the ultimate sin of any public figure, he tricked us. When “College Dropout” first came out it was lauded for not only its incredible musical composition but the subject matter in which it addressed. The lyrics were universally praised for their “intelligence” and “social consciousness”. What occurred is something we’ve seen with many young artists and athletes alike, we as a society assigned a narrative to Kanye West that was simply not representative of the person that he is.  We collectively ascribed his self awareness and honesty as humbleness.

Another prominent figure from the South Side of Chicago has suffered from the same kind of media driven narrative, Derrick Rose. Sheltered by his brothers from a young age as a basketball prodigy, Derrick never had the desire or maybe confidence to convey the person that he truly was to the outside world. As Derrick razed through the NBA for his hometown Chicago Bulls he was held as a Yin to the dark self absorbed Yang of the Lebron James’ and Carmelo Anthony’s of the world. It was only after he was injured and was able to find his own voice that people started to turn on him. Not because he wasn’t great anymore, that certainly had something to do with it but more so because we felt betrayed that the quiet, humble superstar that we had witnessed rise to glory actually had an ego and was as self absorbed as many would be in his position.

Life comes down to expectations, if those expectations are met or exceeded we find ourselves content. Conversely, if they aren’t reached we find ourselves disappointed, dejected and in many cases, angry. It’s unreasonable to think that anybody who pursues a career in the arts and becomes universally successful isn’t wielding some sort of monstrous ego. The odds against making a living wage in any of these fields is astronomically low, let alone to be so successful that you could be considered at the top of his or her profession. Think about that for a second, you wake up in the morning and look in the mirror and can say, “I might really be the best person in the world at my job.” That is the sort of power that even in the most unyielding hands could lead to a swollen ego and a proclivity towards eccentricity.

As we circle back to the central question about separating art from the artist, I would say that of course that comes down to a personal preference. But when examining these individuals, specifically Kanye, take into account that the very things that bother you the most about him are what makes his music so interesting. The artist can’t freely separate him or herself from their art and regardless of how we feel about them as individuals, that is what has allowed them to reach their respective levels of success.   So draw your own conclusions but remember, Kanye doesn’t have a choice to divide himself from his work, it’s inextricable to him and we should be thankful for that.