It was Monday, March 14th, under the sign of Pisces. The US president was Ronald Reagan (Republican). In that special week of March people in US were listening to Billie Jean by Michael Jackson. In UK Total Eclipse Of The Heart by Bonnie Tyler was in the top 5 hits. The Beyond, directed by Lucio Fulci, was one of the most viewed movies released in 1983 while Space by James A. Michener was one of the best selling books.

During this week in 1983 Jon Bon Jovi, Richie Sambora and Alec John Such formed the hugely popular, Bon Jovi. Their breakthrough album was “Slippery When Wet,” spawning karaoke hits such as “You Give Love a Bad Name” and “Livin’ on a Prayer”.  The top of the US charts looked like this at the time:

We’re celebrating Bon Jovi this week because they have a new album coming out.  Jon Bon Jovi announced during a press conference that the title of their upcoming album will be This House Is Not for Sale. In the article, he said the following “The record is about our integrity. Integrity matters and we’re at a place in our career where we don’t have anything left to prove.”  The album is slated to be released this March. 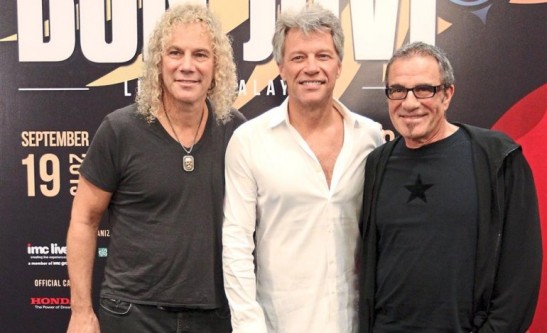 Jon Bon Jovi has enjoyed an eclectic career with forays into acting, serious charitable ventures and even founding and owning an Arena League Football team (The Philadelphia Soul).  His ties to football don’t end there, Bill Belichick considers him to be a close personal friend and just last year Jon came up short on a bid to buy the Buffalo Bills.  Concerns over him moving the team to Toronto lead to Buffalo radio stations banning the play of all Bon Jovi songs on air.  None of this would be possible obviously if Jon, Richie and Alec didn’t get together 23 years ago this week.